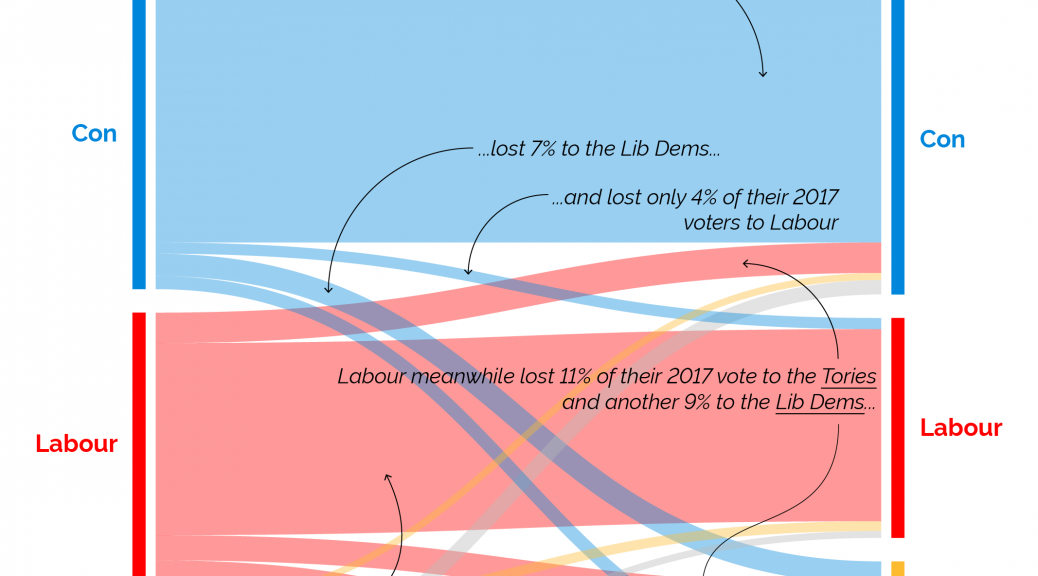 When thinking about how voting patterns differ with age, people distinguish between three types of effect:

Cohort effects: The effect relates to a specific cohort of people (e.g. those born between dates X and Y) and continues to be demonstrated by that cohort as they age. For example, maybe those who entered the workforce between 2008 and 2010 are permanently less likely to vote for policies that favour the free market or bankers.

Period effects: The effect is a function of time and affects all people, regardless of age. For example, maybe in a recession people care more about jobs and are more likely to vote for a party which they think will increase employment.

Clearly, multiple effects can be taking place at the same time.

A lot of the public debate around elections assumes that the entire impact of age on voting patterns is a cohort effect. This can be seen in all the articles which argue that Britain is/will soon be a majority Remain country due to demographics. This proposition, however is dubious: while there may be cohort effects related to the EU (the last four years of debate have probably entrenched some views both Leave and Remain), there is good reason to think that in the longer term, both age and period effects will dominate. Notably, a majority of those who voted to join the Common Market in the 70s voted to leave in 2016.

Related to this, one of the most interesting statistics of YouGov’s analysis of the election result is that the cross-over point – the age at which people are more likely to vote Conservative than Labour – went down from 47 at the last election to 39 last week. Given the last election was 2 years ago, this is effectively a 10 year drop, which is highly significant. The fact that the Tories did comparatively better amongst 39 to 49 year olds than in 2017 also belies the narrative that the election was all about the elderly turning out in droves: while it is certainly the case that age is now a more important determinant of vote than class, it is clearly not the case that the Conservative vote is destined to dwindle with time.

Other interesting points coming from the analysis:

– The Lib Dems are the only major party to show a strong correlation between voting intention and household income, attracting 20% of the vote among households earning over £70k compared to 9% of those earning under £20k. A similar pattern can be found for socioeconomic class. Labour’s support was essentially independent of household income while Conservative support fell very mildly with increasing income.

– The Conservatives outperformed Labour in every income category and in every socioeconomic class.

– The Lib Dems had the most volatile voting base. Despite increasing their vote share from 8% to 12%, they only kept 59% of there 2017 voters and then attracted former Conservative and Labour voters in roughly sinular numbers.

– Labour lost more Remain voters than Leave voters (though it had fewer of the latter to start with).

The full YouGov data and results are here.